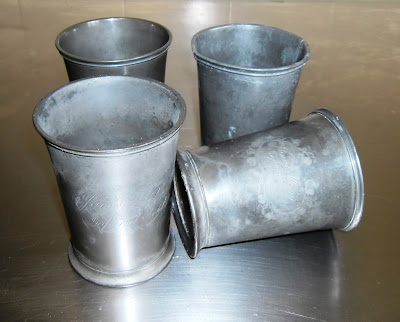 This is a tale – all true – of the origins of four half pint pewter beer mugs that arrived in Donegal from Australia in the year 1862/1863 and have since never travelled more than a hundred yards.

The story begins in 1852 when James left a farm near Convoy to seek his fortune in Australia. Extracts from Victorian Public Records (Australian) state that a James Wray arrived in Melbourne in August 1852 aboard the ship, ‘Fanny,’ which had sailed from Liverpool. The Fanny was 950 tonnes, held 271 people and was bound for Port Phillip Bay. James was an unassisted emigrant so less information is available. He is listed as having Irish nationality and being an agricultural labourer.

Where or when he met his future wife is unknown but she is believed to have emigrated from Baronscourt, Co. Tyrone. A couple with the same names are recorded as being married in Melbourne on the 1st October 1857. Together they ran a hotel in the mining town of Ballarat in Victoria. This hotel was burned down in 1857 and replaced by a new one which was subsequently purchased by the advancing Railway Company. An extract from a local Ballarat paper at the time records the following. ‘ Before the construction of the railway from Geelong, this hotel stood on the site now occupied by the entrance to the Eastern Goods Sheds. The premises were burned down on the 24th December and the rebuilt house was sold on 7th April to make provision for a railway reserve.’

James and Mary decided to return to Ireland. Their two children born in Australia had both died aged 6 years and 2 years – some say of chickenpox. A poignant, much faded photograph records a man and a woman standing beside a grave which still exists in Ballarat today. 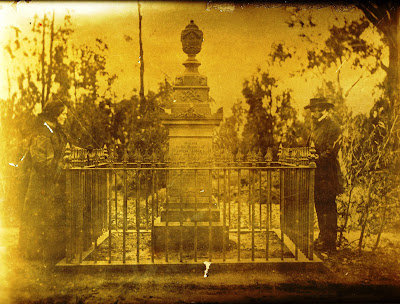 By 1863 James had acquired over 96 statute acres in Donegal – a map of the time records such. Two more children were born to the couple before James died only four years later in 1867. 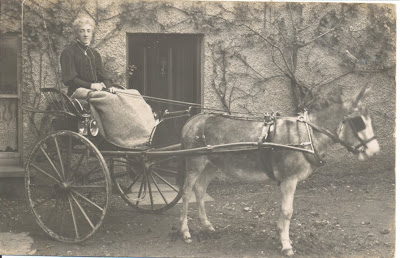 In their luggage from Australia they had carried the four glass bottomed pewter mugs as a reminder of their days in Australia. Engraved on the side of each is – James Wray, Imperial Hotel. Today they serve as a reminder of the courage and fortitude of James and Mary almost exactly a hundred and fifty years ago.
Posted by Ronan at 17:50