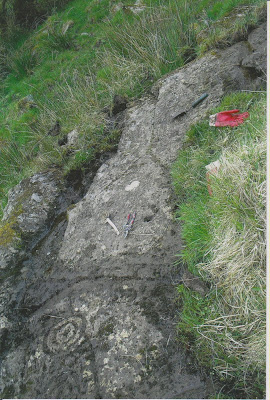 In the upper corner of a field of marginal land two kilometres from Raphoe in the Townland of Magheestown lies a large outcrop of stone known locally as ‘The Giant’s Grave.’ On this rock Bronze Age man engraved cups and circles in the rock probably between four and five thousand years ago. Similar stones exist along Europe’s Atlantic coastline in Ireland (West Cork and Kerry), Northern Britain and in Galicia in Northwest Spain and are thus sometimes known as Galician Art. 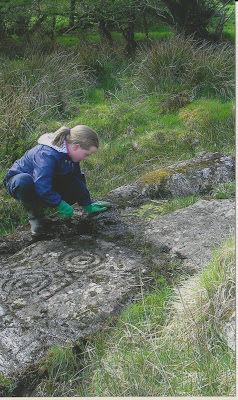 The stones bearing the rock art are known as petroglyphs and are usually found at a site with a wide panoramic view on land that is marginal but surrounded by fertile land. The stoney outcrop at Magheestown has indeed an impressive view. Coraghan Hill with its prehistoric enclosure can be seen in the distance. Sometimes stone circles lie in the vicinity raising the question whether there is a ritual link between the stone at Magheestown and Beltany Stone circle. Certainly the same markings of cup and circles appear at Beltany though they are not nearly so well defined. 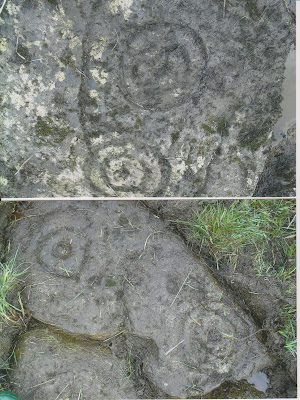 The number of cups and circles to be seen at Magheestown varies according to encroachment of sod and moss at any given time. Over the years there has been damage to the stone with resulting fissures which encourage the growth of moss and grasses and the collection of water. The harsh winter of 2010/2011 has left the stone revealing more art than usual. At the top northern end three large definite cups with two circles around each cup can clearly be seen. 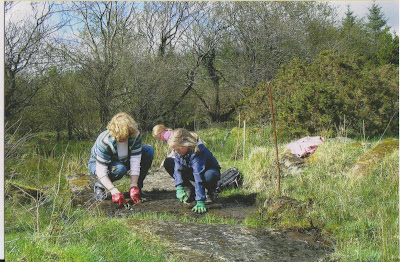 Teresa, Jessica and Eleanor cleaning up the site in 2011

Under these are a series of small multiple cups, some encircled or half encircled with a single ring, some are not. These are less clear. Further down to the left a large hollow occurs, possibly from damage where frogs spawn each year – frogs thrive in the marshy land around and it is unusual to visit this site without meeting a hopping friend. Below this is a very clearly defined cup and circle with evidence of another below being damaged. In the central section of the stone more clearly defined cups and double circles occur. A cross appears through one of these. A cross is rarely found in pre-christian art but is known to occur. From another circle a long line appears which could well be a ‘tail’ described in other petroglyphs as probably a directional aid. This line continues above the said circle but does not pass through it. Other markings to the right are difficult to decipher but straight lines appear. 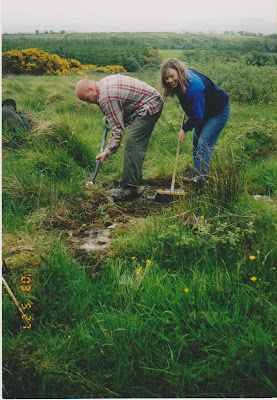 Annabel and Simon clearing up the site in 2003

To the eastern side of the rock are numerous grass covered boulders which appear to be from field clearance. I cannot establish if the giant’s grave lay hidden under sod for generations or if its presence has been known down the generations.

Theories abound as to the significance of rock art. To us the markings appear haphazard but could reflect a known order of the time. Certainly it had ritual and/or mystic role to play in the Bronze Age circle of life. During the Bronze Age there was a big deterioration in the weather and there has been a suggestion that the cups were painted in gold or copper to attract the failing sun. Petroglyphs often occur near copper or gold mines. Was it simply a form of early calender set to the attract the sun’s rays at certain points in the year? Was it an aid to determine sewing times? Did the ancients use it as a road map? Whatever the use, we can safely assume that this isolated spot in Magheestown had an international link thousands of years ago but its exact significance to the men who crafted it will remain an enigma.

Please see below for correspondence between the late Dr. J.W. Wray from nearby Ballyholey and the The National Museum regarding the rock art in the 1970s. 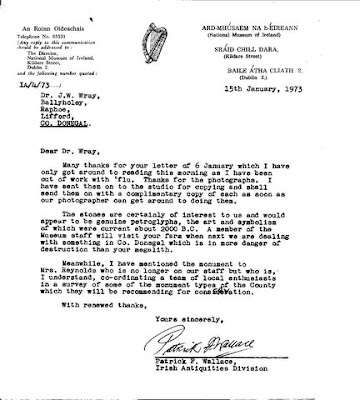 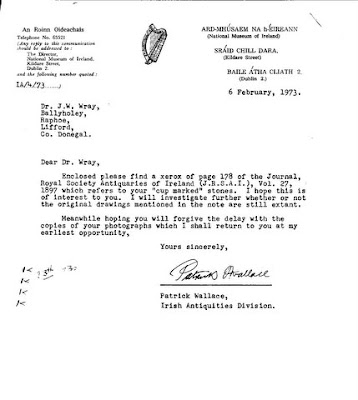 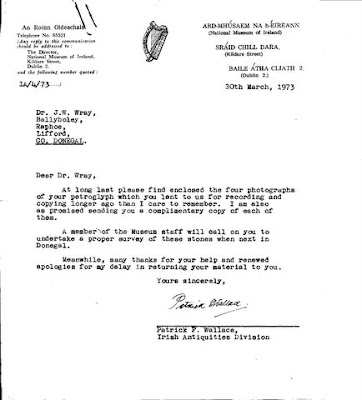 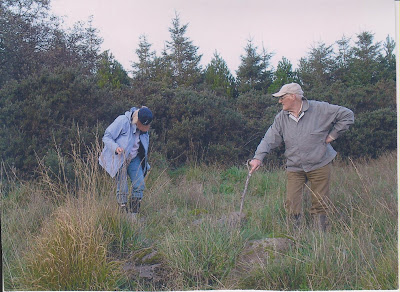